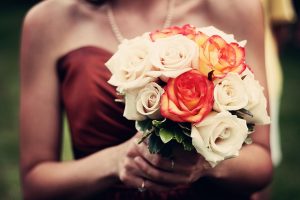 Never a bride, always a bridesmaid.

Ever notice how some people always end up in second place? In the also ran category? No matter what they do, they always end up missing the top spot.

Famous actors like Tom Cruise, Johnny Depp and John Travolta have been nominated for, but never won an Oscar. The same goes for actresses like Glenn Close and Michelle Denning.

Sometimes you can put it down to the competition that year. But seriously, how did Liam Neeson not win for Schindler’s List?

There’s no telling what the judges were thinking, I suppose.

Sports are full of the same kind of stories. Dan Marino, one of the best quarterbacks ever to play the game, never won a Super Bowl. Fran Tarkenton and Vinny Testeverde are two other widely-acclaimed backs who retired without a Super Bowl victory.

Then there are the Olympics. Skaters who train for years, just for that one shot at a gold medal.

And fall in the middle of their routines.

What’s most inspiring about those skaters is they just get back up. And keep going and finish their routine, knowing it’s all about pride at that point. The medal has slipped out of their hands. (Unless, of course, their competition also falls. It’s happened.)

These stories of lost competition meant a little more to me this week, as I failed to meet my own, albeit, more modest goals this week.

I was participating in a Toastmasters Humorous Speech contest. Toastmasters is an organization that helps people improve their public speaking and leadership skills. (And it’s more fun that I would have imagined. )

A few weeks ago, I won at the area level…now it was time for the division contest.

I’d won the division a few years ago, so I knew it was possible.

I’d practiced and practiced, tweaking and improving. During the area contest I boggled my opening a little. So I paid special attention to getting the beginning right.

So I could do it in my sleep.

Meeting my fellow competitors did nothing to keep my hands from sweating and my stomach from churning. One person won the division last year. Another man had won in a prior year, and went on to win the district. This wasn’t going to be easy.

As I watched the former district champion speak, I thought to myself, “He’s going to win this.”

At that moment, he had a brain freeze. He paused. He scrunched up his face.

Then walked over the podium to consult his notes. He wasn’t going to win. Giving me an opportunity.

And what did I do with it? When it was my turn to speak, I nailed my opening two lines.

Then promptly jumped to the fourth paragraph.

Now what? I pushed aside the feeling of despair and kept talking. Somehow, I managed to circle around and get myself sorted out. And finish strong. 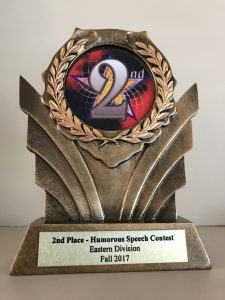 Just good enough to walk away with a second-place trophy. Back in the role of the eternal bridesmaid, not the star of the show.

Disappointing. But an opportunity to consider what I learned.

Which is what we all should do when we don’t get the result we wanted. That’s the only way the outcome will be better next time.

Until at last, we achieve the victory we set out for in the first place.