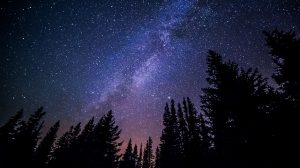 Here’s a short story I wrote that was originally published in Short Fiction Break. Enjoy!

Gritting her teeth, Nadia seized her knife and viciously swung it, chopping down hard. Another potato fell apart in two jagged pieces. If the stolovaya provided sharper knives, her job wouldn’t be so difficult. But what could you expect from a cheap cafeteria? When the ideals of communism were realized, they’d have sharp knives. Until then, she’d have to soldier on.

She knew by the warm glow radiating through her body who had spoken to her, even before her eyes flew up to look into a pair of vivid blue eyes. It was him. The oddly polite dark-haired stranger who’d eaten at the stolovaya a few times a week for the past few months. Why he chose to come to such a dingy place that served indifferent soups and smelled like smoked fish was beyond her.

She pushed a strand of hair back under the scarf on her head. “Angry? No.”

That forced a smile from her. “What would you like to eat?”

He learned fast. The first few times he came in, he was astounded that most items on the menu weren’t available. It was easier just to ask what they had.

“We have shchi.” When he didn’t respond, she added, “cabbage soup.”

His courtesy still jarred her. Most people didn’t bother, either from tiredness or not wanting to appear bourgeois. Nadia ladled out the soup and picked up two slivers of black bread. “Tea?”

“Yes, please.” She poured the tea into a glass set in a metal holder with a handle. He gave her a ruble, and she made his change, counting the kopecks carefully.

He stood at the counter, sipping his tea. “Why are you sad?”

She blinked, surprised by the sudden tears and the overwhelming urge to sob. That one little kindness poked a hole in her will to push on, to remain stoic. She stared down at her hands as she considered what to say. That she still mourned her husband, who died in the war? Grieved for her children, who also didn’t survive? For her own dead dreams of becoming a scientist, of studying the stars? Or the mind-numbing years—twelve, already— she spent chopping vegetables? That I’m getting old and no one will ever love me again?

“I always feel a little down in the fall,” she replied, allowing her shoulders to slump.

“I’m sorry.” He picked up his spoon and stirred his soup. “Do have any family?”

“None who survived defending our country from the fascist invaders.” Standing a little straighter, she continued. “They died for the glory of the Motherland and the Party.”

The man reached out and gently touched Nadia’s shoulder. “You are very strong.”

“I just don’t know how much longer I want to be strong.” She was surprised by the quaver in her voice.

He brushed a tear from her cheek. “I also mourn for my family.”

“My wife died when I was away for my work.”

The break in his voice was like an echo of her own pain. Seeking an easier subject, she asked, “What is your work?”

“What kind of research?”

The man smiled and picked up his bowl of soup and tea. “I can take you to the stars, you know.” He turned and went to sit at a table near the window.

Nadia turned back to the potatoes. At least, she tried to. She watched the stranger, her eyes drawn to him as if by magnets. He ate slowly, almost delicately, eating his soup in tiny bites, lingering over his meal. Had he been flirting with her? Hardly likely. No one would flirt with a worn-out forty-year-old woman starting to grow stout.

After the man left, Nadia’s coworker Galina asked, “Did he say anything interesting? You chattered with him a long time.”

Nadia tensed. “He just wanted to know about my family.”

“That’s just the thing a spy would ask.”

Galina snorted. “First, have you ever seen such white teeth?”

Nadia silently nodded. No one had such perfect teeth. Most people had a mouthful of shiny steel caps. Or lots of gaping holes.

“Hmpf. And what about his eyes?”

The bright eyes that radiated such kindness, eyes that actually noticed her. “What about them?”

“They used to be brown. Today they’re blue.”

“Oh, no, Galina, you must be mistaken.” Nadia tried to say that with conviction, although she knew Galina was right.

“I saw in a movie that American spies change the color of their eyes with contact lenses.”

“A spy, here in Vladimir?” Nadia tried to make her tone light. “What secrets do we have that a spy would want?”

Galina glared at her. “Maybe they’re trying to find out where we built Sputnik, to see if they could catch up with us.”

Galina gave the pot of soup a stir. “Do you know what his job is?”

“He says he’s a researcher.”

“Ha! Exactly the kind of job a spy would have.” She pursed her lips, scraping the bottom of the pot with the ladle. “You know people have seen strange lights over the forest south of town. Lights no one ever saw before he showed up.”

Nadia was saved from answering when two women entered the stolovaya. Galina served them soup and Nadia returned to her potatoes.

Immediately her thoughts jumped to the stranger. Was he an American spy? That could explain his politeness. Americans probably still used bourgeois customs. From what Nadia remembered of the American soldiers she’d seen at the end of the war, they all had white teeth.

“I can take you to the stars.” Was he serious? Surely, he could find a more attractive, younger woman. How old was he? She thought maybe fifty. She lost herself in a daydream about the stranger, of loving him and being loved back. For the past few months, her daydreams about him were her one secret joy. With most men her age dead in the war, she had scant hope of ever finding love again.

The slamming of the outside door made her jump, nicking her thumb with the knife. The stinging pain brought her back down to dull reality. With a sigh, she forced her mind to focus on her work.

A few evenings later, the stranger returned. Nadia felt a lifting of her spirits just by setting eyes on him. He smiled at her as she filled his order and counted his change.

As he walked to a table, Nadia felt a tug on her sleeve. “Keep him here, make him talk. I’ll be right back.”

She understood. Galina was going for the KGB, to denounce the stranger as a spy.

If he is a spy, Nadia told herself, if he is trying to undermine our way of life, then he needs to be caught. I’ve sacrificed for the Motherland all my life, my family died for the glory of the Party. I can’t let one man do anything to ruin it. He’ll just have to pay the price.

Suddenly Nadia realized she didn’t want that to happen. Even if it meant she’d be denounced as a traitor, she couldn’t let the man be taken. She couldn’t be a party to destroying him and the illusion of love he brought to her life. She moved to his table and bent down. “You need to leave. Now. They’re coming for you.”

The stranger smiled gently and stood up. Offering her his hand, he led her into the street.

Slowly, almost casually, he escorted her along the road that led to the birch forest south of town. They walked in silence, her heart pounding, until they reached the trees.

“You have endured much here,” he said. “Yet you still smile. Most people don’t.”

Again, that gentle smile. “No, much farther.”

What did he mean? Argentina? She looked into his eyes. Now they were vivid green.

What do I know of him? She clenched her clammy hands. Will he kill me? Take me to America or wherever? Will he be kind?

All I know is I’ve fallen in love him, and when he leaves, I’ll have nothing, not even daydreams, to fill the emptiness in my soul.

They entered a clearing. In the middle stood a shiny pyramid, about twenty feet high with rounded edges and corners. The stranger tapped a button on his shirt and a door slid silently open.

Her mouth sagged open. The Americans have this machine? Then why can’t they launch their own Sputnik?

She hesitated. “To America?”

“No. I think you call it Andromeda.”