Lake Superior holds a certain fascination for me. Maybe because it seemed so far away to this girl who grew up a few hours from Lake Erie and has lived near Lake Michigan. Superior’s size and legends give it a certain romance, a aura of adventure.

Unlike Erie and Michigan, who conjure up ideas of shipping and commerce, industry and big cities.

Last fall I finally made it to Superior, dragging along my long-suffering husband.

“Why are we going there?” he asked.

“Because I’ve never been there.” That seemed to me reason enough to go anywhere.

We so loved Lake Superior we seized the chance to go back, taking Middle Grandson along for the ride. For a 16 year old, he was remarkably flexible and an uncomplaining traveler. (Note to self: he’s someone I’d definitely want to invite on more adventures.)

Following my minimalist approach to travel planning, I did little but line up some hotels for our two nights on the road.

Not because I’m so hot an advance planning.

It’s because after a long day of travel, the last thing I want to do is hunt up a place to sleep.

And it’s a whole lot cheaper to look for deals in advance.

I was justified in this when we were checking into our first hotel. A man came in just after us and asked about rates. He was quoted $40 more than what we paid.

I made sure Much-Loved Husband Who Hates to Plan Ahead knew about that one.

But I’d getting ahead of myself.

Our first adventure took us to Amicon Falls State Park.

It’s a tiny park, hardly a speck on the map. But oh so worth a visit. The Amicon River hurls itself toward Superior, ripping at the rocks it spills over.

All the while making a series of falls and pools of rusty red water, stained by the tannins from the pines that guard the river’s banks.

People were swimming in the pools, playing in the pull of the water, diving under the falls, testing the water’s power.

After a hike through the fragrant pines and around the falls, we headed east and north, headed for Washburn. It sits on the eastern shore of the Bayfield peninsula, facing the sun as it rises over Superior. Like many resort towns, it has the obligatory tourist gift shops and ice cream parlors.

What it also has is a fabulous breakfast spot (Coco’s) and live theater.

From Washburn we headed north, to catch a cruise through the Apostle Islands.

So named because the original European explorers thought there were 12 of them. They missed 10 in their count. Oops.

We sailed around and through the islands, hearing the local lore. Hermit Island, it seems, was named after a man who lost a fight. His penalty was to leave the island he’d lived on. He picked an uninhabited one, and chased off any visitors with a shotgun.

Devil’s Island guards the rest from the winds and storms that pummel the southern shore of the lake. The scars of that conflict are evident: 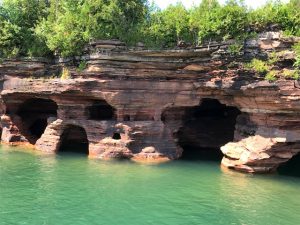 Kayaks explored the caves or leaned back, basking in the sun. Some even jumped overboard for a swims, saying the 65 degree water was “warm.”

Supposedly when the wind blows fierce, the caves shriek, giving rise to the name.

The winds weren’t strong that day. But the breeze was fresh, bringing that cool northern air that refreshes and energizes and stirs stories to life in my mind.