Last week I shared Part 1 of “Mischief.” Read on for the conclusion: 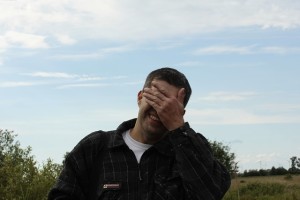 Karen’s roommate Judy was incensed over the way Jeff had treated Karen. He’d even been talking marriage, then came up with a lame reason to break things off. Judy felt Jeff needed to be taken down a peg or two.

She seized her opportunity by inviting Jeff and his buddy Bill over for lunch one day after church, along with four or five others. She and Karen made a good old southern brunch, with waffles and egg casserole and hash browns. Judy made sure she was in constant motion, first in the kitchen, then the dining room, or living room, or balcony, wafting in and out of the rooms as easily as the smell of sizzling bacon. With so many people squashed into the small apartment, it was hard to keep track of who was where.

I was helping them clean up after everyone had left. Both Karen and Judy had smug smiles on their faces. “We sure got them,” said Judy.

“What are you talking about?” I asked, wiping grease from the stove.

They looked from one to the other. “You have to promise not to tell.”

They told me. The guys had left their suit coat jackets in the bedroom. Judy had slipped in and placed certain objects in the inside breast pocket of both their coats.

“You didn’t.” I was horrified.

“Oh, yes. We did.” The two of them were so pleased with themselves you’d think they’d won the Nobel Prize. Then they came close to me, one on either side, with narrowed eyes and eyebrows pulled together. “Don’t tell them.”

I agreed. After all, I thought, they’ll probably notice there’s something in the pocket that shouldn’t be there. Or they’ll take their coats to the dry cleaner. Or something. No one will see but them.

Monday morning, Bill was making his rounds as a sales rep for an agricultural supply company. He drove south into rural Missouri, stopping by small town hardware stores. He’d been working with one store for weeks, and they’d just made a deal for a large order. Bill produced the contract for the store’s owner to sign and reached into his suit coat pocket for a pen.

When he touched it, he noticed what he thought was his pen was covered with paper. “What’s this?” he asked as he pulled it out. He looked at the thin white object, eyes popping and gasped, dropping it on the floor.

His face flaming, he picked the slender Kotex tampon before it rolled under a display of garden tools. The store manager chuckled. “That doesn’t belong to you, son?”

Jeff fared not much better. He was a financial executive for a large Catholic health system. Monday morning he had a meeting with some of the nuns who ran the system. Needing a pen, he reached into his pocket. He pulled it out, saw what it was, and immediately replaced it and felt for another object he was sure was a pen. Feeling his face burning, he looked out of the corners of his eyes, hoping none of the nuns had noticed. All but one wore the serious looks of someone participating in an intense finance meeting. Sister Ruth’s face, however, wore a smirk that couldn’t possibly have anything to do with the balance sheet her eyes were fixed on.

Within an hour, Jeff and Bill were on the phone to each other, comparing notes. “We know who it was,” said Jeff. “Who else would do such a thing?” They began to plot revenge.

Their chance came soon enough. Karen’s company transferred her to North Carolina. She threw a big party the night before the movers were to show up. Knowing that Jeff and Bill were most likely up to no good, she met them at the door and made them turn out their pockets.

They pretended to be hurt that she would even think such a thing.

She didn’t take into account the fact that those guys had other friends. One of them had stopped at the drugstore on the way to the party.

A few days later, when Karen unpacked, she found the little gifts Jeff and Bill had left her in retaliation. Hundreds of condoms, stashed all over. Some in the dishes. Some in the coffee. A few slipped between the tea bags. Tucked into books and in bags of clothes. Piles under the cushions of the couch. Handfuls stuffed into dresser drawers. Months later, she was still finding them.

I never did find out exactly what broke up Jeff and Karen. In some ways they seemed like a perfect match, both fun loving energetic people.

But one thing I did know. I was never going to get on Karen’s wrong side. Who knows what mischief she’d dream up at my expense?