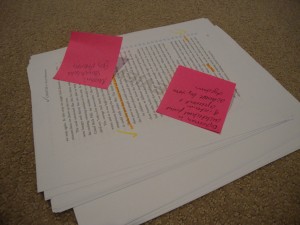 Creating the story, pounding out the first draft..those are the easy parts. I just let my mind go and let my characters do the talking. I travel the journey with them until the end of the story.

Then I let it rest while I do something else.

After a month or so, or whenever I get my nerve up, I read through my draft. I’m looking for the dull spots, the inconsistencies, and the places that might cause a reader to put the book down in disgust.

So I start revising and editing.

And this is where I’ve been with my first novel for the last 3 and half years. In the meantime, I wrote (as a ghostwriter) and published a memoir. I also drafted two more novels for the series, and am finishing the draft of the last novel in the series.

But I’m stuck on the editing. Three and a half years, and I don’t feel I’m making any progress. Really I feel like I’m drowning in scribbled notes telling me what to fix. It’s like they’re all screaming at me, and I don’t know what to do first. Or which ones to ignore.

So I was thrilled that the fine people at NaNoWriMo sponsored a “What Next” webinar. All about what do you next, now that you’ve drafted your novel.

This was one of the best investments in an hour I’ve spent in a long time.

Some of the best tips from the session:

Don’t start editing on page 1 and go through. Start by making sure your structure is sound.

If you don’t feel you have enough sense of tension, look at the stakes your main character is facing. They need to be a matter of life and death.

This doesn’t necessary mean physical death, but it could. Or it could be psychological or professional.

It’s also important that it’s clear to the reader what the main character wants. This could change over time, but there always need to be a clear, compelling goal.

Thinking back to books that failed to keep my interest, this last point is certainly true. When there isn’t a clear goal, the story feels like a drifting narrative that isn’t going anywhere.

Another way to create tension is to look at the scenes. Are there obstacles and conflict? One way to ramp this up is to make sure the main character in the scene is afraid of something.

It doesn’t have to be full blown fear. Even a nagging worry is enough. Have them nervous they won’t be able to achieve their goal.

Or they could be frozen in terror. But make sure they’re fearful of something.

Often when two allies meet, the scene is dull. There’s no conflict between them because they’re allies. So have one of them have some internal conflict that makes it hard to communicate.

Another thing was to surprise the reader with the character. Have them do or say something unexpected in every scene. Or add a character who will create problems for them.

In keeping with this, to make dialogue unpredictable, one tip was to grab a random novel, pick a line of dialogue and tweak it to fit. Come up with a reason one of your characters would say this. And just don’t have them answer each other directly too often.

Now I’ve got two pages of notes, ideas for things to look at in editing. But at least now I know taking the time to make these corrections will make my story stronger.