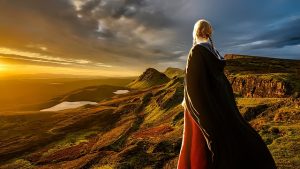 What makes a great read? For me, it’s characters I care about who live in a world that draws me in. It doesn’t matter what genre, characters are key. They need to grow and be transformed by their experiences. I want to live those experiences with them as I read.

If I’m reading fantasy, then the world building comes into play. The best fantasies make almost believe that their world is real.

I’ve read quite a few fantasy novels this year. Here are the best four:

Cinder is a genre-bending novel, mixing a retelling of Cinderella with some science fiction (cyborgs, artificial intelligence, and visitors from the moon) along with a dab of magic. Not to mention a little romance on the side.

What worked for me was how likable and unique Cinder as a character was. In spite of being downtrodden, she was optimistic with a sense of humor and never gave up.

I just found Cinder a few weeks ago, but I’ll be sure to read on in the series.

Court of Thorns and Roses

A Court of Thorns and Roses is an exquisite retelling of Beauty and the Beast, with some serious differences. There are some truly disturbing scenes, some absolutely gorgeous ones.

Because this series ventures into dark fantasy a bit, I wasn’t sure how I felt about it. After I finished A Court of Thorns and Roses, I kept thinking about Feyre and what she sacrificed for the man she loved, and how that changed her.

Then I realized I had to know what happened next.

So, I bought the second and third books. And read through them all twice.

No other series since Lord of the Rings has captured my attention like the Atlantis Grail series. Set about fifty years in the future, an asteroid is headed toward Earth, threatening to wipe it out. Spaceships appear in the sky, manned by beings who claim to be descendants of those who fled the cataclysm that wiped out Atlantis 12,000 years ago. They offer rescue to a tiny segment of Earth’s population, only those who qualify.

Which is how the story of Gwen Lark begins. I’ve read through the first three books of the series at least three times, with equal enjoyment each time.

Yes, I’m now picking up minor plot holes and have a few quibbles with the writing. But the way I live Gwen’s story with her each time I read it makes me forgive all the little issues and let me immerse myself in the excitement, drama, and romance that unfolds.

And as soon as the fourth book is available, I’ll be up all night reading it.

Right from the first, I was intrigued. Why was Olina veiled from birth, by her mother, the Queen? Why did her mother loathe her so intensely?

How could I help but feel for Olina as she fell in love with Prince Kedris of an enemy kingdom, carrying on her romance behind her thick veil?  This was one of those books that pulled me in, kept me reading as fast as I could, and breathlessly waiting for the end.

And you guessed it, I bought the rest of the books in the series.

Anyone want to share what fantasy books they’ve loved this year? Let us know in the comments.

A Court of Thorns and Roses, Atlantis Grail, Cinder, Fantasy of Frost