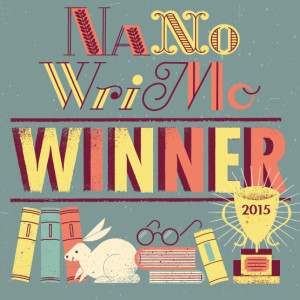 When I started, I thought it was impossible, that I had no chance of success. That I was crazy for even trying.

To my great delight, I was wrong.

For the second year in a row, I “won” NaNoWriMo.

Why did I think it was impossible?

Mostly because of what I had on my calendar for November. I knew we were going away for five days toward the beginning of the month to celebrate our wedding anniversary. We were expecting a grandson at the end of the month. And I’d signed up for an online class.

In spite of this, I thought I’d give it a try. One big reason is that by having the external deadline, I’d be more likely to push through and get a big chunk of my novel drafted.

Going along with that thinking, I was sure that if I put it off, there was no telling when I’d get around to it. There’s never a good time, so I told myself, so I’ll just have to fit it in.

And as in years past, I learned that I can sit down and pound out a scene or two if I make myself. Many times this year I sat down at the kitchen table after dinner, tired from the day, but got my fingers moving over the keyboard. And the words just flowed.

This year I tried the strategy of aiming for 3000 words a day, written in three 1000 word blocks. That worked great, since 1000 word is about an hour’s work.

By doing this, I was able to make up for the days when I had absolutely no time to write. 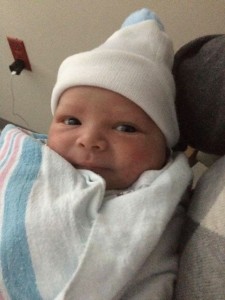 In spite of losing a day for a funeral, and lots of travel and other commitments, by making a big push I passed the 50,000-word mark on November 23, just a few hours before our grandson was born.

That was enough for NaNo. I’ve still got a long way to go until I finish writing Stinging Power. My story hasn’t yet got to the second plot point, or about the 75% mark.

But now I have some momentum, and I can see the end in sight. My plan is to slow the pace to 1000 words a day. If I can keep that up, I’ll finish by Christmas. Then I can set it aside to rest, and go back to editing Raising Fear, the first novel in the series.

As I write, it’s the day after Thanksgiving. There’s a lot to be thankful for, from a new life to the feeling of accomplishment, of meeting a goal I thought was out of reach.

This is inspiring me to set a few goals I don’t think I can attain, and see what happens.

How about you? Any other NaNo winners? What are some goals you’ve been thinking about setting, but didn’t think you could achieve? I say go for it! You might just give yourself a reason to be even more thankful next Thanksgiving.