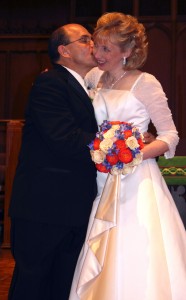 How many weddings have you been to in your life? About 20 years ago, I made a list of all I could remember. It was a long list…about 75. That was the time in my life when it seemed like everyone I knew was getting married, except me. I vowed the next wedding I attended would be my own.

That, of course, didn’t happen. I must have attended another ten or twelve before my own wedding six years ago. Since then, another three or four.

Last weekend I had the joy of attending the wedding of a friend’s son. This was a real family affair: the groom’s father performed the ceremony, his brother was best man, his sister was one of the bridesmaids.

After the ceremony, there was the reception, great food, dancing and the traditional toasts and lots of tapping on water glasses to get the newlyweds to kiss. To the disappointment of many, when it came time to feed each other cake, the new couple gently fed each other. No cake smashed in the face for them.

Have you ever noticed how every wedding has a flavor all its own, even though many of the traditions are the same? Last week’s wedding overflowed with joy, no family dramas clouded the scene, and the groom and his siblings unashamedly showed their love and respect for their parents and each other. It was the picture of the family I always wanted to have, but never did.

Most important, the bride and groom are two young people uniting for life before God and their families and friends, and the entire event reflected that conviction. That was how I felt about my own wedding. Others I’ve attended have been based on different beliefs, and it showed in the spirit of those events.

There’s a wedding (actually two) in my first novel of Tlefas, and as I create the customs surrounding that event I think back to the weddings I’ve attended. The traditions can be fun, but more important is the intent of the bride and groom, and those around them. Is this a wedding for life? A solemn event? Simply a legal contract, made for a defined length of time?

Other questions come to mind. Do the families involved feel the need to impress their neighbors? Or would any display be considered gauche?

So in Tlefas, I have the villagers, the riskers, the bandits and the pirates. As I create their customs, I think about what makes the idea of getting married important to them.

The villagers have group weddings, and the day of the ceremony is a half-holiday for all. It’s a legal matter, not a religious one. However, people are expected to stay together, for the stability of society. All unions have to be approved by both families, and the mayor.

The riskers, predictably, have a more carefree approach. People get married when they want, and to whom, and the ceremony is just one more excuse for a party.

And the pirates and the bandits? I really don’t know what they do. In the third book of the series, I’ll have to send someone to visit them to find out.